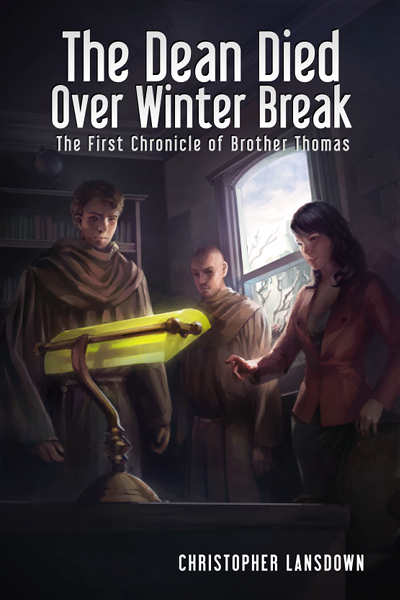 Winter Break is normally a peaceful time at a university so it was quite a shock when Dean Floden was discovered Monday morning murdered at his desk, the window wide open behind him. A blizzard sent everyone home on Friday afternoon so there’s no time of death and no witnesses to see who came or went anyway. The police have little to go on and are making slow progress. Worried about an ongoing investigation when the students return for the spring semester, the president of the university calls in the Franciscan Brothers of Investigation.

Brother Thomas, still with the intensity of youth despite long experience uncovering the sins of the world, is sent along with his apprentice, Brother Francis, whose jovial smile and mild manner belie his ever-growing knowledge of fallen humanity. Awaiting them on their first day are a jealous mistress, a clever drug dealer, a disappointed researcher, and a mortally insulted professor. Did one of them do the other three a big favor? Or was it someone else entirely? With everyone at the university looking out for their own interests, can Brother Thomas’s sharp eyes and Brother Francis’ insight find the truth behind the academic façade?

(You can read the first chapter free online.)

For full reviews, to check out the Amazon Reviews and the GoodReads Reviews

"It was very difficult to put down the book and not read, read it until the last page!" -Keti

"If you're a fan of Brother Cadfael, you'll like this novel." -Borderbumble

"It's well worth a read for any mystery fan just for the unique detectives. I'd love to see a sequel." -Nigel

"It is a quick and enjoyable read with interesting characters with whom I'd like to spend more time in the sequels." -Alfred

Christopher Lansdown is a novelist, computer programmer, and the father of three very energetic children.

The cover art was painted by Janette Ramos

Copy editing done by Autumn Worth.